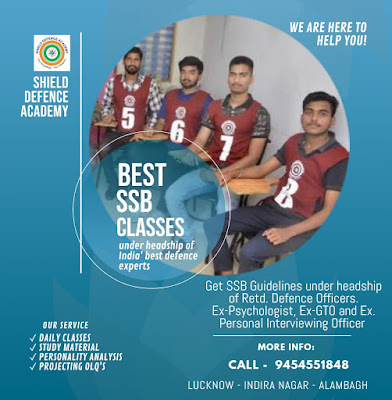 Shield Defence Academy, best NDA Coaching in Lucknow is the best platform to make your defence career stand at threshold of fortune. Work Hard and you will definitely achieve your target. We are always one step ahead to prepare our Shieldians for NDA, CDS and all defence examinations. We are excelling in every defence examinations like NDA, CDS, AFCAT, SSB, AIRFORCE-X/Y Group Exam, NAVY-AA/SSR. Your search for best defence coaching institute lies here. Join Shield Defence Academy now to earn stars on your shoulders tomorrow.

The National Defence Academy (NDA) is the joint services academy of the Indian Armed Forces, where cadets of the three services, the Army, the Navy and the Air Force train together before they go on to respective service and elite academies for further pre-commissioning training.

Candidates need to fulfil the following eligibility criteria in order to be eligible for the exam.

The date of birth is calculated as mentioned on the Matriculation or Secondary School Leaving Certificate or in a certificate recognised by an Indian University as equivalent to Matriculation.

Army Wing of National Defence Academy: Candidates must have passed Class 12/HSC under 10+2 pattern of school education or equivalent from a recognised board or university.

Air Force, Navy and Naval Academy of National Defence Academy: Candidates must have passed Class 12 under 10+2 pattern of school education with Physics and Mathematics conducted by a State Education Board or a University.

Shield Defence Academy is one of the best coaching for NDA Courses, CDS Courses, SSB Courses and AFCAT Courses in Lucknow. SHIELD DEFENCE ACADEMY guides students both for written examinations and for SSB interviews. It has a planned process for the selection into the reputed career of defence. It also provides training for special Entry Scheme for Women. We are the Best coaching Institute of India.