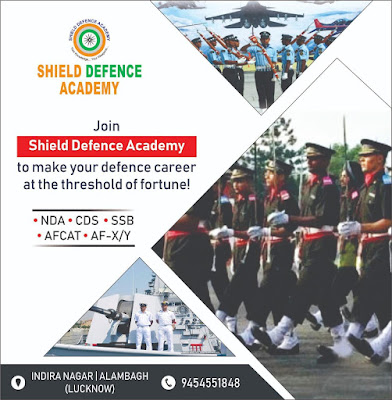 Indian Armed Forces provide an ample amount of opportunity to students of each age group. Joining The forces i.e. Indian Army, Indian Navy, and Indian Air Force has become a trend for students nowadays as it is among the most prestigious jobs in India with complete job security and other pleasures as well.

Shield Defence Academy, Best NDA coaching in Lucknow here briefs you about the entries, the Armed Forces of India releases. There are two types of entries for candidates-

Shield Defence Academy is one of the best coaching for NDA Courses, CDS Courses, SSB Courses and AFCAT Courses in Lucknow. SHIELD DEFENCE ACADEMY here guides students to know more about these entries.

1)    NDA:- National Defence Academy is for all 12th passed or appearing candidates to get commissioned in any of the three forces i.e. Indian Army, Indian Air Force, and Indian Navy. This is only for Male candidates

2)    Technical Entry Scheme (TES) 10+2 :- Technical  Entry Scheme is for all 12th passed candidates with Physics, Chemistry and Maths with art least 70% to apply 0. This is direct SSB Entry only for male candidates..

3)    10+2 Navy B.Tech Entry:- This entry invites 12th passed candidates with at least 70% aggregate marks in Physics, chemistry and maths. Call for SSB interview will be issued on basis of JEE (Main) All India Rank. This is direct SSB Entry only for male candidates.

1)    CDSE OR Combined Defence Services Examination:- Combined Defence Service Exam is for all graduates to get commissioned in any of the three forces i.e. Indian Army, Indian Navy, and Indian Air Force. Conducted twice a a year. This entry is for both male and female candidates. Females can apply for OTA or Officer’s Training Academy.

Best CDS & AFCAT coaching in Lucknow, Shield Defence Academy offers AFCAT aspirants offers an integrated course, designed exclusively by our expert faculty for the candidates appearing in the AFCAT and CDS exams, keeping in mind all the requirements and the curriculum of the exam itself.

3)    INET or Indian Navy Entrance Test: This exam is for Executive, Technical and Education Branch in Indian Navy.

4)    NCC Special Entry: This is direct SSB entry for both male and female candidates conducted twice a year. Age Limit is 19 years-25 years. It requires 2 years of service in NCC Senior Division Army with minimum ‘B’ grade in ‘C’ certificate Exam.

5)    JAG or Judge Advocate General:  This is direct SSB entry for both male and female candidates in Indian Army. Graduates in LLB / LLM with 55% marks is required. He/She must be registered with Bar Council of India / State.

7)    TGC or Technical Graduate Course: Male Candidates born lying between 20 years to 27 years and pursuing BE / B.Tech can apply in this direct SSB entry conducted by Additional Directorate General.